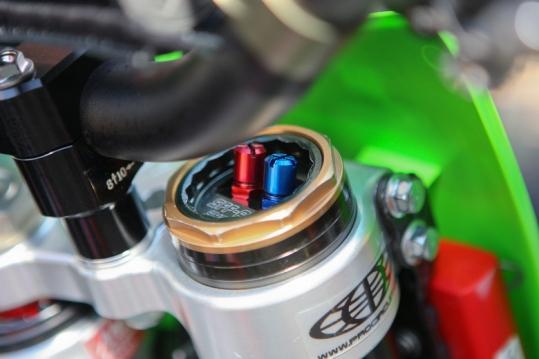 Forks: The forks must be installed properly for optimum performance. Make sure that the upper and lower clamps are torque to factory spec. We recommend 18 ft/lbs for the upper and 14.5 ft/lbs for the lower on most bikes. This ensures that the inner bushings can past inside the clamp surface without binding. Binding can also occur when the axle clamps are not aligned with the upper fork legs.

Make sure that this does not happen by loosening the bolts on the clamp that slides on the axle. After it is free enough to slide, compress the front end several times to put the lower portion of the forks in a neutral position. Proceed by tightening the clamp bolts to spec. If headshake occurs, the headset (steering stem) may need to be tightened or the race sag is not correct.

Shock: The upper and lower shock mount bolts should be installed with thread lock and torque to spec. The spring preload should be adjusted to achieve the proper race sag before any other adjustments are made. The measurement from the rear axle to a point on the rear fender should be noted when the bike is on a stand. The same measurement should be taken with the bike off of the stand and the rider standing over the centre of the bike in full gear. The desired difference of the two measurements will vary for some bikes but should be approx. 1/3 of the total suspension travel.

Notes: *1/4 turn is equivalent to 2 clicks for adjusters without clicks